All the popular beachside resorts in Lanzarote offer a wide range of pizzas, burgers, chips and fried breakfasts. However if the whole touristy ‘brits abroad food scene’ is getting a bit tedious, I highly recommend scouting out a traditional Canarian restaurant and trying some of the more traditional Canarian dishes available, ‘comida típica Canaria’.

We drove to La Caletas to visit Casa Tomas which had come highly recommended, only to find it closed, so I had to put my fate in the hands of Google to find a restaurant that was close by and looked good. By that point my stomach was emitting regular gurgles, similar to that of the camel I had ridden the day before! Phone in hand we drove ten minutes to Casa Felix in Costa Teguise.

Felix, the restaurants namesake, was a warm and gregarious character, welcoming us with exuberant hugs and kisses. We chose a table outside at the front of the restaurant overlooking the ocean, there is nothing better for the appetite than breathing in fresh salty sea air. After perusing the menu we decided on a tapas platter and we splashed out on a couple of additional dishes as well. Below are some of the foods I tried whilst at Casa Felix that are typical of Canarian cuisine and are definitely worth sampling whilst you are in Lanzarote! Firstly, let’s quickly talk about the concept of tapas…

Tapa (singualar) or tapas (plural) is a small dish that is usually served with a drink, the concept is of Spanish origin but is now recognised internationally. The word tapa can be literally translated as a ‘lid’ or a ‘cover’. The concept of tapas derives from the early bars that used to serve a slice of ham or cheese with a drink, and then placed over the drink. There are a couple of possible reasons why this was done. Most feasibly it would have kept flies out of a beverage. It could also have been used to disguise the smell of bad wine! Legend also tells of a King, who unable to stomach alcohol without having food alongside it, issued a Royal decree that all drinks should be served with food! This legend has been linked to the Spanish King, King Alfonso X, El Sabio or “The Wise One”.

The goats cheese we were served was cut into thin rectangles and shallow fried. Crispy and golden around the edges it was similar to hallumi. The texture was slightly rubbery and it was mildly flavoured with a slightly salty aftertaste. Goats cheese is an extremely popular dish in Spanish cuisine and the Canary Isles produces much of the goats cheese that Spain consumes, it is not surprising therefore that goats cheese features on many Canarian menus. 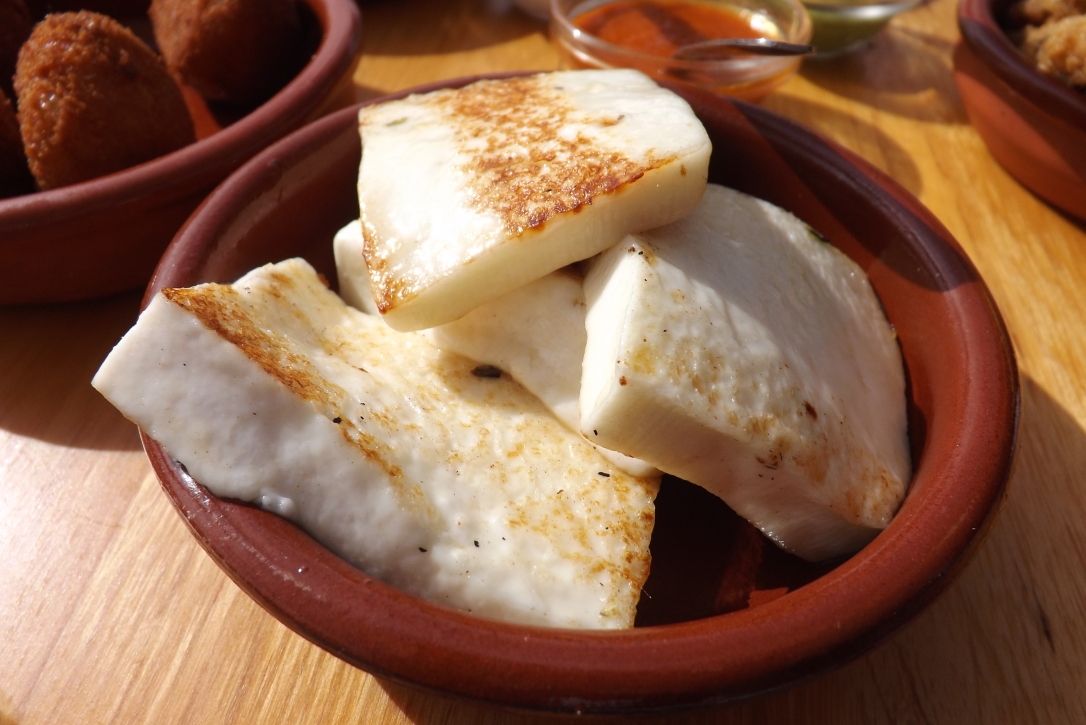 Sometimes called Canarian potatoes – these are small, locally grown potatoes that are boiled in very salty water (originally sea water) in their skins until most of the liquid has evaporated. This leaves the potatoes with a delicious salty crust. They are traditionally served with mojo rojo and mojo verde.

Every restaurant has their own (often secret) recipe for their mojo sauce . Mojo rojo (a vibrant red colour) can be quite hot and spicy whilst the green tinted Mojo verde is packed with garlic and coriander and provides a cool fresh contrast to its fiery partner. Sometimes aioli, or garlic mayonnaise is served as well

These are small anchovy fillets that have been pickled in olive oil, vinegar and garlic – delicious on their own or placed onto slices of fresh bread. Having had a similar dish in Southern Spain, I was excited to see Boquerones on the menu as they are one of my favourite types of tapas! In contrast to the grey and boney tinned anchovies that are often served up in salads and on pizzas in England, the flesh of these anchovies is white with a sparkling silver skin. The anchovy fillets are served drenched in oil and vinegar, the vinegar giving the fish an absolutely delicious tangy and sour flavour that works well against the oiliness of this dish.

Felix’s version of Boquerones was topped with massive of chunks of garlic, which were large enough to provide a burst of flavour and heat when bitten into. My favourite way to eat these delicacies is with a cold glass of cerveza (beer) and a slice or two of fresh bread to mop up all the salty, garlicky oil. 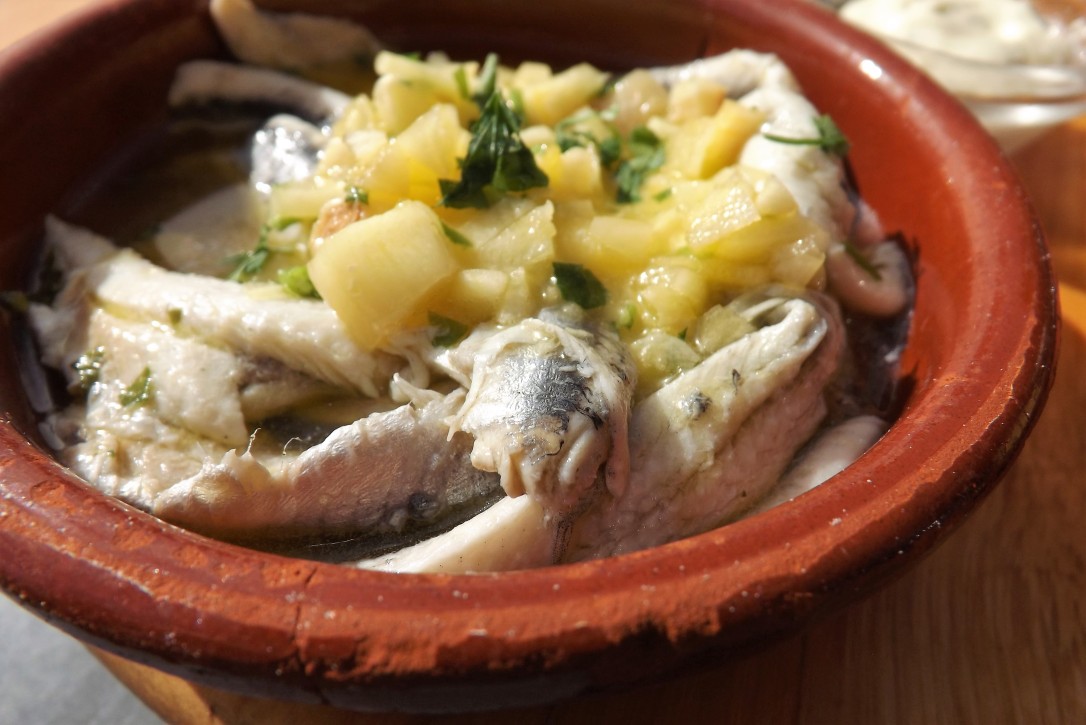 Puntillas de calamar are tiny whole baby squids, dredged in batter and deep fried. Crunchy and delicious, they just need a squeeze of lemon to accentuate their sweet mild flavour. To eat these its best to pop them in your mouth, chew and enjoy the contrast of the tiny, crispy battered tentacles and the soft sweet flesh.

2 thoughts on “5 Foods to try in Lanzarote”